With New England’s loss to Buffalo last week, the Packers take over as the #1 team in the CouchGM rankings for the first time. Riding a 4 game winning streak and with games remaining against the Vikings and lowly Lions, the Packers will likely win out and head into the playoffs as the #1 seed in the league.

Kansas City is the hottest team in the league with an 8-game winning streak. Kansas City’s offense continues to be among the best in the league, but the defense has been much improved in this winning streak. After starting out as one of the worst in the league, allowing 29+ points in each of the first 5 games, they have only allowed 20+ points twice in the next 10 and only once during the current 8-game streak. They now rank 15th in the league in points allowed per drive, the same ranking as when they won the Super Bowl in 2019.

What a performance from Joe Burrow, passing for 525 yards and 4 TD’s in a huge game against Baltimore that put Cincinnati in the driver’s seat in the division and all the way up to 3rd in the AFC standings. Cincinnati has a tough this week at home against Kansas City in a matchup of CouchGM’s #2 and #8 teams. 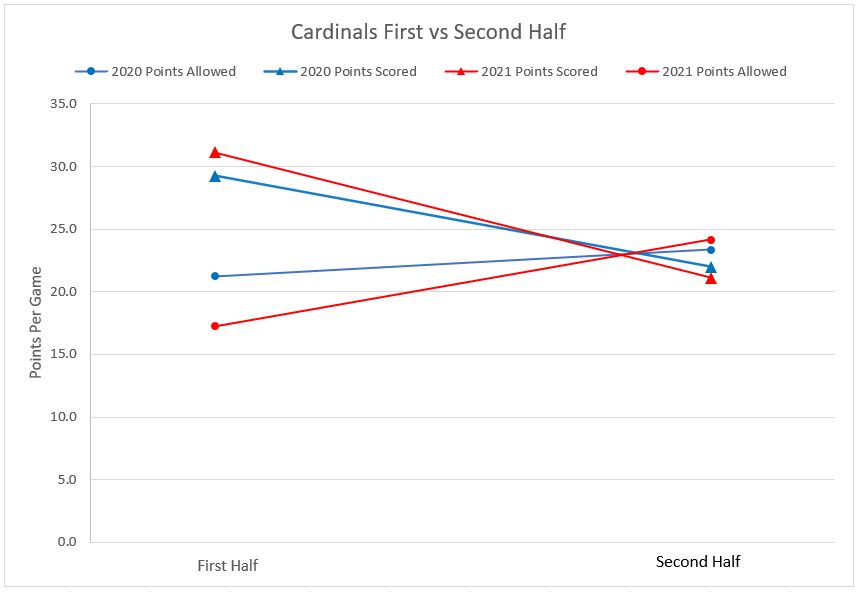 The same trend shows up if you look at yards per game, but it looks worse for the offense. There’s a large drop in yards gained but not a huge change in yards allowed. It appears that after half a season, the rest of the league has once again figured the Cardinals out. Next week’s game at Dallas (CouchGM’s #5 team) doesn’t make it look like the streak will be coming to an end either, and Kliff Kingsbury’s seat gets warmer with each loss.

Unfortunately for the Colts, even with a win over Arizona they drop in the rankings due to course-corrections for Tampa Bay and Tennessee.

Denver is once again rated higher by our model than their record indicates. They are once again 13th this week, but the reality is that they are on the elimination chopping block.

Of the NFC teams in this tier, the only teams that still control their own destiny are #15 San Francisco and #16 Philadelphia. #14 Minnesota is rated slightly ahead of both SF and Philly but needs them to lose to get in. Same goes for #17 New Orleans, who is just behind.

The AFC picture is a little messier. A big win by Miami vaults them into the playoffs if the season ended today and they can clinch a playoff spot with two more wins (and could potentially climb with help from the teams ahead of them in the standings), though those two wins will be tough: at Tennessee and home against New England. I think 1-1 is the best case scenario with 0-2 more likely.

Unfortunately for the Chargers, though they look better on paper than many of the teams that have not yet clinched, they still need help. Their loss to Houston this week was a huge missed opportunity. Fortunately for the Chargers, however, they have the best QB of the four 8-7 teams fighting for the 7th seed (Herbert > Tua and Carr, and the uncertainty around Lamar Jackson’s status for Baltimore gives Herbert the edge). Also, I think they have the best chance of the 8-7 teams to go 2-0 and finish 10-7. Baltimore has a tough matchup with the Rams this week that gets worse without Jackson and Las Vegas plays at Indianapolis, fresh off of a victory over the Cardinals. The Chargers, on the other hand, have a home game against the struggling Broncos, followed by a road game against the Raiders, who the Chargers already beat earlier this season.

All of these teams no longer control their own destiny.

Since all eliminated teams have 0.00% championship probability, they are sorted in descending order of projected record.