For the fifth week in a row the top-4 consists of the same teams, and for the third week in a row the order of the top-4 is unchanged. The individual team probabilities will fluctuate as Phoenix and Golden State (and possibly Utah) trade the #1 seed back and forth throughout the season (PHX gained 2.5 percentage points this week by reclaiming the #1 seed), but I don’t foresee anyone else displacing any of the top-4. These four have established themselves in a higher tier than the rest of the league.

Santa brings another awesome Suns vs Warriors matchup that will be the highlight of the Christmas Day games.

Utah also plays on Christmas Day, and is 8-2 in the last 10, tied with the Suns for hottest team in the league right now. Utah’s offense is smooth jazz lately, too, scoring 118 or more in 6 of the last 8. The gap between the #1 Utah offense (117.1 points per 100 possessions) and the #2 Hornets (112.7) is the same as the gap between the #2 Hornets and the #20 Mavericks (108.2). Utah is a whole head-and-shoulders above the rest of the league offensively. Their slow start is the only reason they are a few games behind Phoenix and Golden State for the #1 seed in the West.

The #5 spot has been a bit of a revolving door. Chicago climbs back to #5 this week with 2 wins in a row after a couple of postponed games. Milwaukee (#8 below) probably would have climbed into the top-5 if not for a loss to the Pelicans last week. Milwaukee is 15-5 in the last 20 after starting out 6-8. They are returning to championship form and are the one team I’d think has a chance to catch the top-4.

We also have yet another week of the same teams in the top-10, though there’s a bit of change in the order. As we noted a couple of weeks ago, after about 20 games we pretty much know who’s who in the NBA.

Our model still really likes Charlotte and Atlanta, mostly due to their strong offenses (Charlotte is #2 in offensive rating and #6 in eFG% and Atlanta is #3 and #8). As we’ve noted before, strong offense alone will carry you farther than strong defense alone. These are really the only two teams for which there is a big disagreement between the projected and actual records (Charlotte projected 0.604 vs 0.500 actual and Atlanta 0.577 projected vs 0.484 actual).

At risk of repeating last week’s commentary, I’ll highlight the Cleveland Cavaliers again. Even with Collin Sexton playing only 11 games and Evan Mobley, Jarrett Allen, and others missing a handful of games each, the Cavs are 19-13 and 7-3 in the last 10, tied for the best 10-game stretch in the East right now. Check out their projected win total over the course of the year: 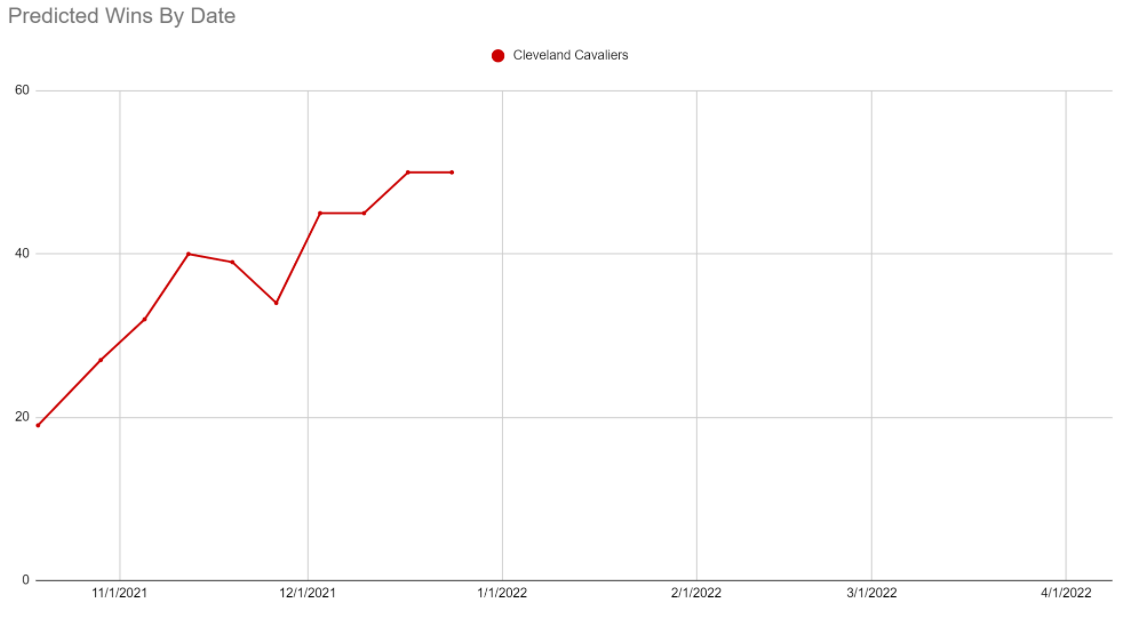 Aside from one rough week in late November, the Cavs have been cruising and are now projected to finish with 50 wins, +31 vs their preseason projection!

Darius Garland has taken another leap, now averaging nearly 20 points and 7 assists on solid 48/39/90 shooting splits. CouchGM doesn’t get official All-Star ballots, but you can count on Darius Garland getting my unofficial vote this year.

I also believe that Collin Sexton’s best role is as a 6th-man. He’s a 6’1 guard with no playmaking ability to speak of, but he’s a solid shooter (career 37.8% from three) and has shown that he can really score (career 20 PPG). Especially with Cleveland, and Garland in particular, thriving in his absence, that reality is becoming more apparent. But that’s a tough ask for a 22 year old. I think he should (and suspect that he eventually will) follow the Jordan Clarkson career arc of starting for middling teams before embracing the 6th-man role on a contender and winning a trophy or two.

In the Playoff Picture

9 of these teams will eventually be left out of the playoffs, but at this point all of them still have a reasonable chance of making the play-in games. Sacramento is only 1 game below the play-in line in the West right now and Indiana is only 2 games below in the East, though they’ve made it known that they are open to selling.

Indiana actually has a positive net rating (0.5 points per 100 possessions) and stats that indicate they could/should be better than their record. If I were in charge I wouldn’t go into firesale mode just yet. Searching out a trade that yields a better roster fit, though obviously easier said than done, could shoot Indiana back up the standings and into the playoffs. If they decide to finally split up Sabonis and Turner, I'd target a wing or a more switchable PF that can shoot, possibly something centered on Sabonis for players like Jaylen Brown (Boston could decide it's time to split Tatum and Brown), Pascal Siakam (Toronto could decide he's expendable with Anunoby and Barnes, though his contract would make this difficult), or Jerami Grant (Detroit is reportedly open to moving him) to make Indiana more versatile and modern.

Pre-draft, my favorite prospect was Jalen Suggs. He was only an average three-point shooter in college (about 34%) but had good size for a point guard (6'4) and is an efficient scorer (shot 59% on twos, 50% overall) and solid defender. His rookie season has been a bit disappointing. He's scoring 12 points per game, but his efficiency hasn't translated yet: he's shooting only 39% on twos. To be fair, he's also missed time with injury. I'm hoping that with experience and growth he'll return to college form.

Orlando appears to have hit on the Franz Wagner pick, on the other hand. He's scoring 15 points per game with good efficiency (45% FG and 35% 3FG) and looking like the type of big, shooting, switchable wing that teams covet. Orlando is bad, but they look to have at least one (and hopefully two) solid building blocks for the future.